On Monday afternoon the Big Procession or ‘Cortege

Cortege
The Fasnacht parade on Monday and Wednesday afternoon.’ takes place. The ‘Cortege’ is carried out through the Fasnacht Committee

Cliques
Cliques refer to the bigger groups which include drummers and flutists. . In addition other groups as ‘Chaisen

Chaise
Is a carriage with costumed figures.’, ‘Wagen

Wagen
Is a wagon which is pulled by a vehicle and which is filled with flowers, confetti and candy.’ and ‘Einzelmasken

Einzelmasken
This refers to an individual in costumes who marches alone.’ take part. The ‘Cortege‘ lasts until 6:00 pm.

Those who take part in the ‘Cortege’ follow a pre-planned route. There is no specified starting place and there are no agreed formations which the groups follow.

Subject
The subject of Fasnacht refers to the themes presented during the official procession.. The costumes, masks (known as ‘Larve

Larve
Larve are masks which are in part made of laminated paper.’) and other components reflect the given subject the group has chosen to focus on. It is the cliques that engage with and provide the most detailed exhibition of their subject in the procession. All of the various components together create the so called ‘Cliquenzug

Cliquenzug
This describes all the components of a Clique during the official procession.’.

In very few Cliques ‘Vorreiter’, which translated means riders who ride ahead, lead the Fasnacht procession. 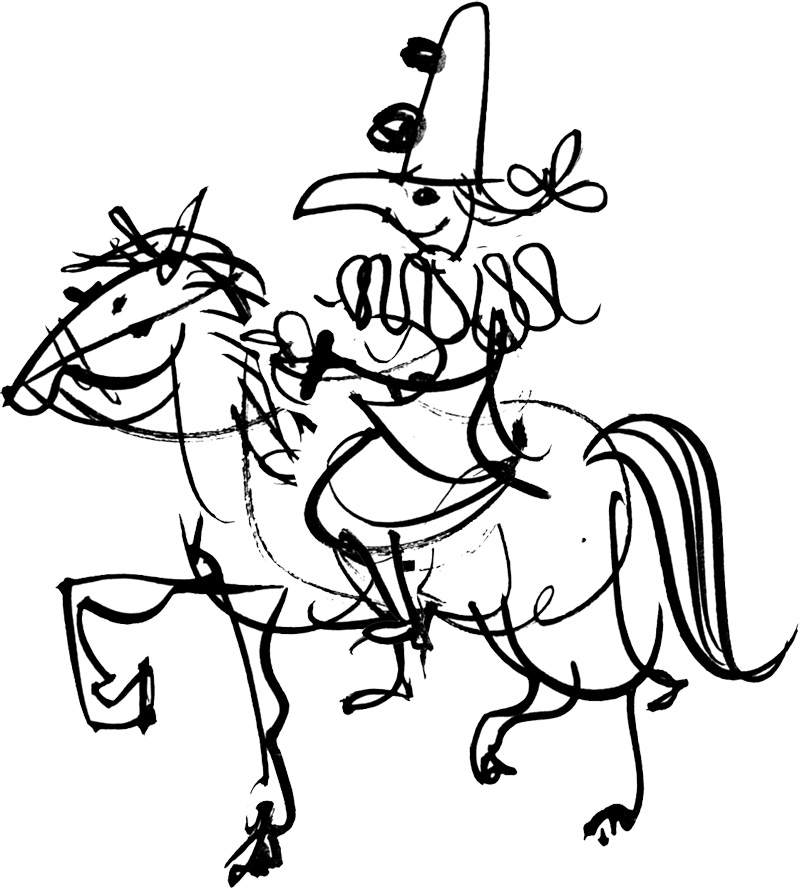 Is a costumed individual who clears the way for his clique. The ‘Vortrab’ is also in costume but does not play an instrument. During the Big Procession the ‘Vortrab’ hands out the ‘Zeedels

Zeedel
These are leaflets which are written in satirical verses.’ which refer to the paper leaflets on which the groups theme is written about. 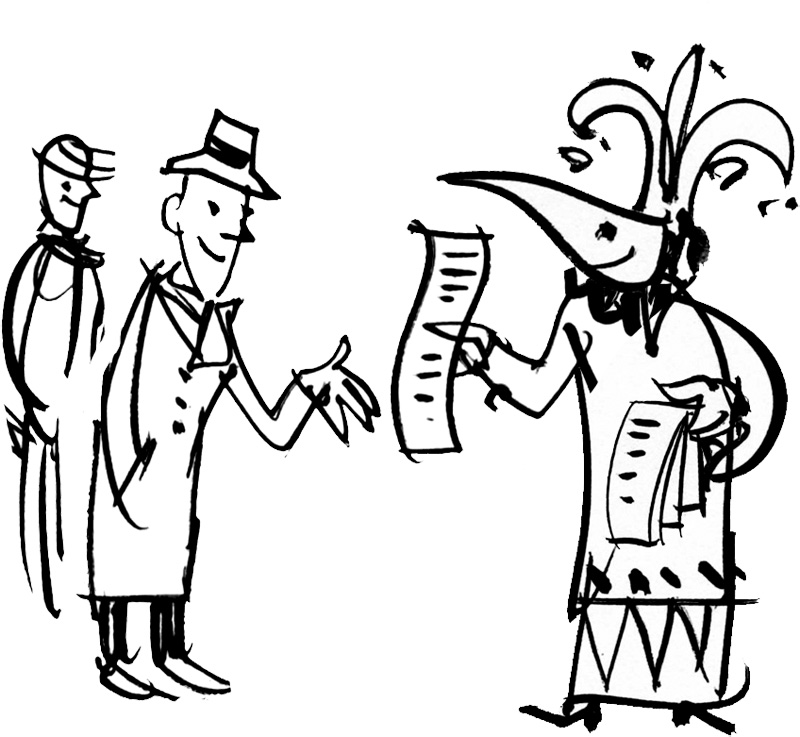 These are leaflets which are usually in a long, narrow format and are written in ‘Basel dialect’ and in satirical verses. 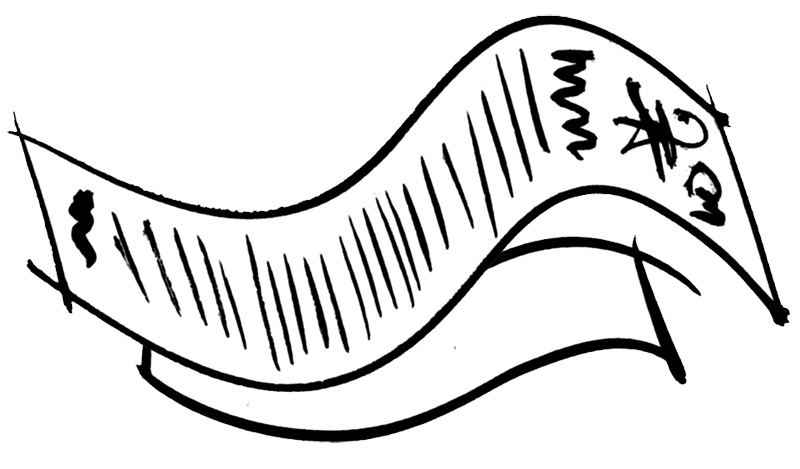 This is a prop which is usually mounted in the cart that one of the ‘Vortrab’ pulls along during the procession. The construction usually adds to, or further enhances the subject/theme of the clique.

Lanterns play a big role in Fasnacht. The lanterns themselves usually depict caricatures and are illuminated. They are carried by appointed lantern carriers on their shoulders or are pulled by a wagon. The paintings are usually painted by an artist or amateur. Each lantern illustrates a different aspect of the cliques theme. The lanterns can be as big as two to three meters high and can be viewed on Fasnacht Tuesday at Münsterplatz. 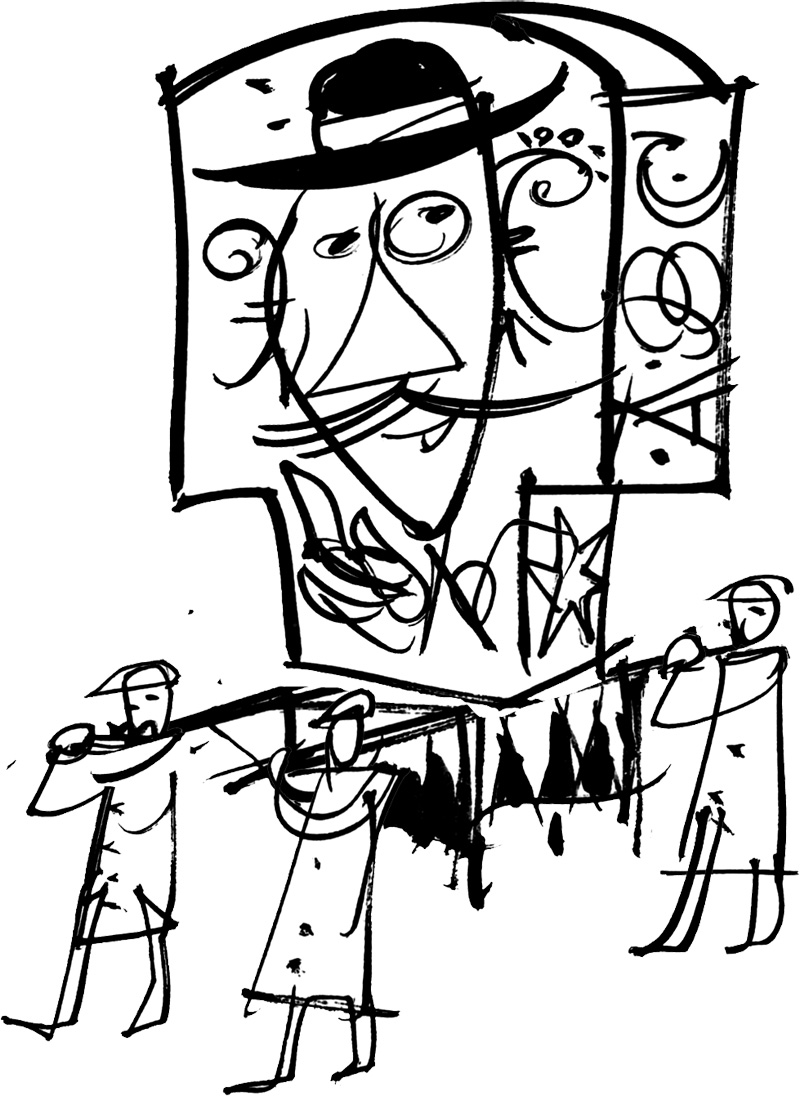 The musicians come after the Lantern

Lantern
Lanterns are painted on canvas which is fixed to a three-dimensional wooden frame.. The music is played by and comprised of flutists, Drum major and drummers. The Drum major dictates which march pieces will be played and conducts the drummers following him with his stick. The mask of the drum major tends to be bigger than those of the other members of the clique. The reason for that is his key role in representing the subject or theme the clique is portraying. 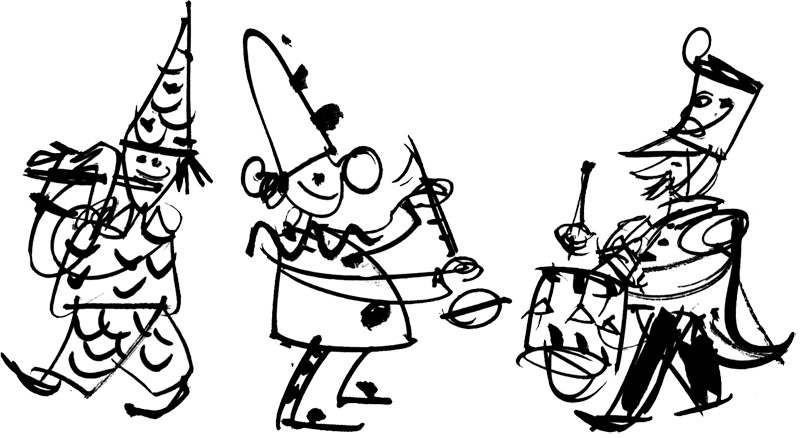 The wagons are pulled by vehicles and are filled with flowers, confetti and candy. Wagons are only used in the official procession (‘cortege’) and are usually built and decorated by the members of the Cliques using them. 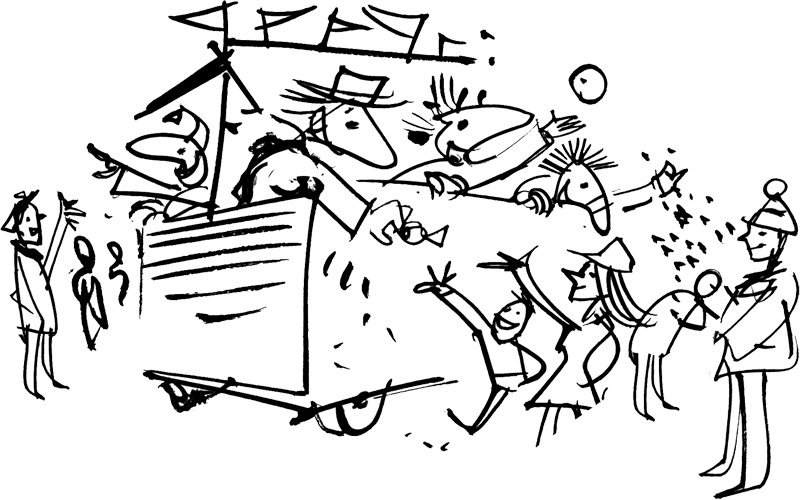 It may be that one of the components is missing. This depends on the capabilities of a clique.

An official guide from the Fasnacht Committee is in charge of providing information concerning the participating cliques and their subjects. This ‘Fasnacht leader’ can be found at the bookshop Bider & Tanner and at all hotspots of the Fasnacht Commitee at Barfüsserplatz, Claraplatz or Marktplatz.

Not all groups take part in the organised procession. Therefore they are also known as ‘wild’ group formations. These groups ‘go it alone’ and do not follow any prescribed route. Instead they begin later in the afternoon. This late start can be attributed to their participation in the ‘Morgenstreich

Morgenstreich
This is the official start of Fasnacht in Basel.’ in which they marched later into the morning.

There are also ‘Gugge Music’ groups who perform spontaneously. These groups tend to be much smaller and only play in the evening.

Many of the visitors tend to stand on the bridges (Mittlere Brücke, Wettsteinbrücke). These bridges offer visitors a beautiful place from which they can see the old city and the Rhein. Other areas of the city which are worth watching the procession from are: Barfüsserplatz, Marktplatz, Wettsteinsplatz and Steinenberg.